Each November, Canadians take time to remember all those who have, and continue to serve in the military. As we commemorate Veterans Week and Remembrance Day, learn more about the memorials and ceremonies to honour Canada’s service members with these titles from our collection.

Each year on October 18, Canada observes Persons Day to commemorate the anniversary of the recognition of women as persons under the law. We are happy to share these titles from our collection to mark this landmark moment as part of Women’s History Month.

October is Canadian Library Month, celebrating the remarkable role libraries play in bringing communities together. We are proud to partner with libraries across the country and are excited to share these titles highlighting some of the ways in which libraries serve Canadians.

September 30 is Orange Shirt Day and National Day for Truth and Reconciliation, which honours the children who were sent to Indian Residential Schools and never returned home, Survivors, their families, and their communities. In 2015, the Truth and Reconciliation Commission of Canada released its final report about the history and legacy of Indian Residential Schools. You can read the report here.

As the calendar turns to fall, millions of young Canadians are returning to the classroom. As we mark this annual tradition, please refer to some titles from our collection about supporting Canadian students. 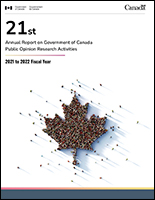 The 21st Annual Report on Government of Canada Public Opinion Research Activities is available for download from our collection. The report features an overview of public opinion research activities coordinated and contracted by PSPC on behalf of departments in 2021 to 2022.

During the summer months, Canadians flock to lakes and waterways to enjoy beautiful weather, spectacular scenery, and quality time with family and friends. Learn more about sailing and watersports, including ways to keep everyone safe on the water, with these publications.

On the morning of August 19, 1942, nearly 5,000 Canadian troops raided the German-held beaches of Dieppe, France. On this 80th anniversary, we invite you to explore these titles to learn more about their service and sacrifice.

Summer is in full swing and Canadians are getting outside to enjoy the beautiful weather and natural beauty our country has to offer. Here are some publications from our collection highlighting just a few of Canada’s many summer activities.

On July 25, 1917, the federal government introduced the Income War Tax Act to help pay for Canada’s First World War effort. Now an annual spring tradition, check out some publications on the income tax in Canada.

On July 20, 2005, the Civil Marriage Act came into effect, legalizing same-sex marriage in Canada. Today, we are proud to share some titles from our collection highlighting its importance for all Canadians.

Every year, from coast to coast to coast, people come together on July 1 for Canada Day. On this 155th anniversary of Confederation, please enjoy these publications highlighting some of our annual celebrations.

Every year on June 20, we recognize World Refugee Day, which honours the strength and courage of people who have been forced to leave their homes to escape conflict and persecution. We are highlighting some publications on Canada’s policies and efforts to addressing this global issue.

June is Pride Month in Canada and brings Canadians together to highlight the strength and celebrate the cultures of LGBTQ2+ communities across the country. As part of Pride Month, check out these titles from our catalogue.

This year’s Environment Week will be held across Canada from June 5 to 11, which includes Canada’s Clean Air Day. For more information about Canada’s environmental programs, here are some titles from our collection.

Every year, May 31st is World No Tobacco Day. To learn more about the negative impact of tobacco use on health, here are some publications from our catalogue.

The 71st edition of Mental Health Week takes place May 2-8, 2022. If you’re looking for relevant resources on the topic, please browse our collection.

World Book and Copyright Day is celebrated every April 23rd. This day pays tribute to books and authors, in addition to promoting discovery and reading.

We invite you to browse our collection of publications to explore new topics.

Adopted in April, 1982, the Canadian Charter of Rights and Freedoms embedded equal rights protection for all Canadians into the Constitution. It sets out those rights and freedoms that Canadians believe are necessary in a free and democratic society. This includes affirming linguistic and treaty rights while also explicitly prohibiting discrimination on the basis of colour, religion, sex, age, and disability. If you’re looking for more information on the Charter as we approach the 40th anniversary of its introduction, here are some titles from our catalogue.

The Honourable Chrystia Freeland, Deputy Prime Minister and Minister of Finance, has tabled Budget 2022. This important document sets out the government’s fiscal, social and economic policies and priorities for the coming year. You can now read the budget on our website at the following link:

In the early morning hours of April 9, 1917, the first wave of 15,000 to 20,000 Canadian soldiers began the attack on Vimy Ridge. Facing snow and sleet, the Canadians confronted heavily armed German forces as they sought to take the strategically important hill in northern France. Over 4 days, all four divisions of the Canadian Corps, fighting together for the first time, took Vimy Ridge. In the years following the First World War, this remarkable military victory, which came at the significant cost of 10,000 killed or wounded Canadians, has became an important national symbol of the sacrifice and courage of Canadian soldiers. You can learn about Vimy Ridge and its legacy in the following publications.

International Francophonie Day, held annually on March 20, celebrates Francophone culture, and communities around the world while also championing linguistic diversity. To help commemorate, here are some publications highlighting the French language and Francophone communities in Canada.

Here are some publications highlighting the many achievements and contributions of Black Canadians and their communities who have contributed greatly to making Canada the multicultural and prosperous nation in which we live today.

test
Report a problem or mistake on this page